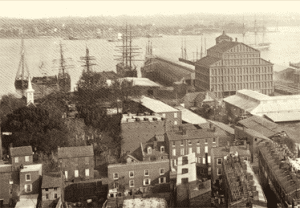 The New World was often hostile to this ﬂood of impoverished Irish immigrants. In America’s cities, including Philadelphia, they arrived to face the native “Know-Nothing” movement, which defined “American” in terms that excluded the newly arriving Irish as “papists,” “foreign paupers,” “a motley multitude.” Most came from rural, agricultural backgrounds, but they landed in an urban, industrial world. Many had never been more than twenty miles from home before undertaking the hazardous transatlantic journey. Apprehensive, but eager to start a new life in freedom, they disembarked at ports like this one on the Delaware River in Philadelphia. However, when seeking employment, they were often greeted with the message “No Irish Need Apply.” Yet, by 1850, eighteen percent of the population of Philadelphia was Irish.

Attitudes toward the Irish were typiﬁed by an English commentator who described Irish immigrants as “more like tribes of squalid apes than human beings.” A prominent Philadelphian wrote of the Irish that they had “revolting and vicious habits. Being of the lower order of mankind, they were repellent to those who were further advanced in the social scale.”

Philadelphia historian Dennis Clark summarizes their plight: “The antipathy toward them rested not only on their reputation for violence and their religious difference from the bulk of the city’s natives, but also upon their competition for jobs at the lower occupational levels, their menial status, their foreign aspect and clannishness…. To the grievous sufferings of the famine generation were added the cultural and class indictments of a largely hostile public opinion in the country to which they had ﬂed.” Back…