Ireland in 1846 was a nation in the depths of An Gorta Mór,
“The Great Hunger.” 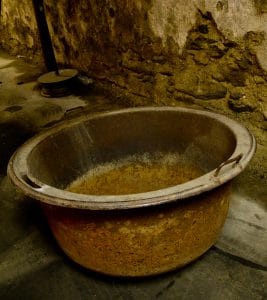 The humble famine pots’ sole purpose was to feed the starving population in the packed workhouses and in temporary soup kitchens that had been set up around the country.

We have the Quakers to thank for mobilizing relief aid from around the world to come to the rescue of the Irish. Many of them were merchants and businessmen and through their worldwide appeals, food, money, and clothing poured into Ireland on a scale unprecedented up to that time. With only 3,000 Quakers in Ireland and a population of around 8 million, they worked tirelessly, and some died from famine-related illnesses. In the winter of 1846, the Quakers provided 294 coire or big cauldrons which would later become known as famine pots to set up the first soup kitchens. Pots came from a number of different sources. The Quakers from Ireland, England, and the US donated pots. The Philadelphia Irish Famine Relief Committee and the Philadelphia Society of Friends (Quakers), led by Thomas Cope, funneled relief supplies from all over the United States to Ireland.

The Sultan of Turkey donated some pots. He also wanted to donate 10,000 pounds (equivalent to about 39 million today) but Queen Victoria’s diplomats said that it would be unseemly to donate more than the crown since their donation was 5,000 and so the sultan donated 1,000 and also secretly sent ships with food. The British government followed the Quaker example in setting up soup kitchens and supplied 600 pots.

The first workhouse was set up in 1841. They have been described as “the most feared and hated institution ever established in Ireland.” However, we cannot blame the “famine pot” for the sins of its keeper. By 1847 there were 1,850 temporary soup kitchens in operation nationwide and millions of people were dependent on a daily serving of soup or “stirabout” from the humble pots. However, almost as quickly as the soup kitchens were set up, they were also closed. Charles Trevelyan, in control of famine policy, wanted to prevent the Irish from becoming “habitually dependent” on the British government.

The meals that were made in these pots came from food purchased, supplied by relief, or sometimes grown by the workhouses. Unfortunately, the recipes were generally not balanced for minerals and vitamins and over time gave rise to scurvy and other diseases. Substitute ingredients were used often, like treacle and water (used as a milk substitute) and Indian meal, instead of oatmeal. This example of a soup recipe could feed roughly 800 hundred people (per 100 Gallons): 92 gallons of water, 69 lbs of flour, 20lbs of parsnips, 20lbs of turnips, 7 lbs. of beet, 7 lbs. of onions, 14 ounces of pepper, and 7½ lbs. of salt. Alex Soyer, a high-profile French chef, set up a model soup kitchen in Dublin where his recipes were supposed to provide sufficient nutritional value for those in dire need. Accounts suggest that as many as 5,000 people a day were fed at this soup kitchen alone.

After the famine, little value was attached to these pots, many of them were used by farmers to feed animals, hold grain, or for other farming needs. They have been used as garden planters and ornamental pieces. However, in recent years there has been a resurgence of interest in these once vital objects and many have been restored and given the due respect and honor they rightfully deserve.