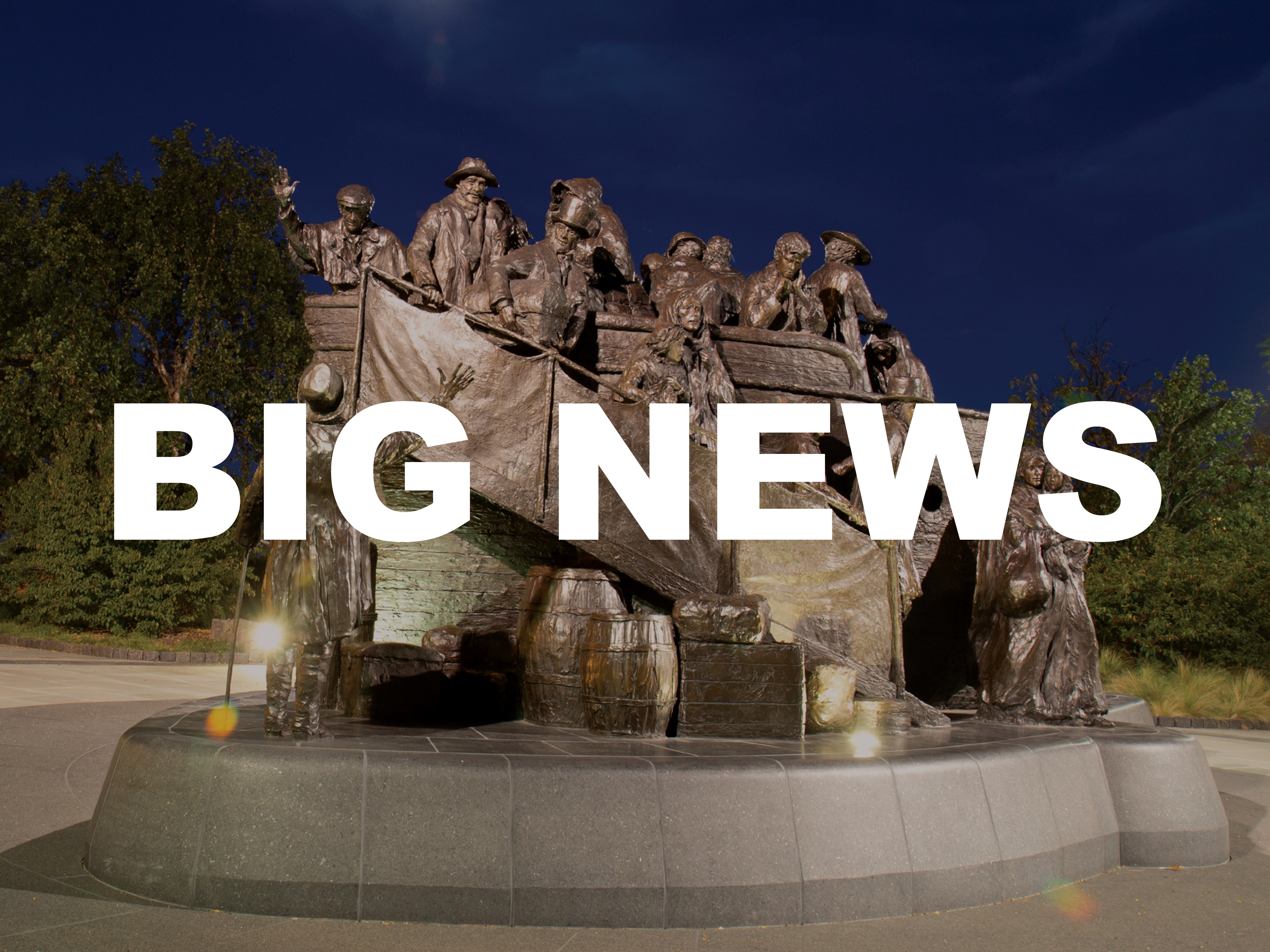 IRISH MEMORIAL UPDATE: When work begins on a new 11-acre park that will run from Front Street to the river and from Chestnut Street to Walnut Street, The Irish Memorial will be temporarily relocated. We are currently working with City, State, and local authorities to identify a temporary relocation site, that will allow access to the Irish Memorial. We will keep you notified of the upcoming changes on this website and on our social media pages. To understand more about this complicated move, read below and link to The Irish Edition.

Thank you for your continued support of the Irish Memorial.

The Irish Memorial will be Moving
Five Questions for Bob Gessler
President of The Irish Memorial Board of Director
By Katharine Gilbert of The Irish Edition (Link to the Irish Edition)
Dedicated in 2003, The Irish Memorial was constructed to commemorate the sesquicentennial of An Gorta Mor, the Great Hunger, and to recognize the contributions of the Irish to the growth of this City, State and Nation. It quickly became the symbol for immigrants from every country. The monument, sculpted by Glenna Goodacre, is the centerpiece of a 1.5-acre park designed by award-winning landscape architect, Pauline Hurley-Kurtz. The entire site sits atop a cover park over I-95 at Front St. that stretches from Chestnut Street to Walnut Street.

1. Why is The Irish Memorial being moved from its present location and where is the proposed location and how was that determined?

There are currently two large development projects affecting the area. One is the long-term multi-phase initiative to rebuild and improve Interstate 95 in Pennsylvania. The other is part of a $225 million development project designed to reconnect the city to the waterfront.

PennDOT has been working on I-95 both north and south of Penn’s Landing. In the near future, development will start on the Penn’s Landing area. Part of the initiative is to replace the cover park going over I-95. The new cover will be integrated into The Waterfront Project; part of the City’s Master Plan to develop an 11-acre park that will run from Front Street to the river and from Chestnut Street to Walnut Street. In order to replace the cap over I-95, The Irish and Scottish Memorials will have to be temporarily re-located.

As a vital stakeholder in the project, we have been in conversations with the City, PennDOT, the Delaware River Waterfront Corporation and others over the past few years. The Board of The Irish Memorial is in support of development projects as they certainly will enhance and improve the area for all residents and visitors to the area. The Irish Memorial will be a key element in the newly constructed park, which will likely include restaurants, housing and hotels, and most importantly a large public space.

2. Who are the decision makers guiding this project?

3. Is the move to a new location permanent and if not will the Memorial be put back in the original location?

The Board of The Irish Memorial spent a significant amount of time in the original site selection process and determined that the current location was most desirable for the type of park contemplated. Since that time, we have invested significantly in promoting the site as a destination. The Board has had assurances for the various stakeholders that The Irish Memorial will be re-built on the original site. So, the short answer is a resounding NO to a permanent relocation and YES to returning to its original home.

4. Do you feel the City Administration is aware of the importance of the Memorial and its impact beyond the City?

Yes, there is no doubt that the City Administration is aware of the Memorial’s importance to the City and beyond. That vision was clearly understood by then Mayor Ed Rendell who was a huge supporter and champion of the Memorial. He saw this project as not only a great piece of public art, but as a destination for visitors from all over the country. The actual reach extends well beyond the US.