The Irish in America

The Irish in America 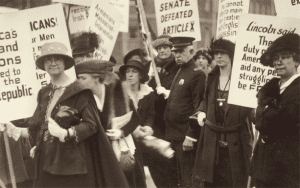 The ﬁrst wave of Hunger Emigrants faced enormous difficulties, but they found a foothold in what became America’s ﬁrst urban, ethnic ghettos. Often, they lived in overcrowded hovels beset by disease, crime, unemployment, drink, and despair. Their communities were dubbed “Paddytown,” “Irishtown,” “Micktown.” But against great odds, they endured. They sought whatever work could be found, becoming newly industrial America’s cheap laboring force. They built railroads and bridges, dug canals and tunnels, went into mines, tended furnaces, worked as servants and seamstresses, and fought and died to preserve their new found home. Two hundred sixty-three natives of Ireland would go on to earn the Congressional Medal of Honor, more than from any other foreign country. The Irish forged a cohesive communal voice by forming labor unions, political organizations, and cultural and religious societies. Gradually, they became Irish-Americans.

Their struggle paved the way for those who would follow. In the sixty years after The Great Hunger, over six million would leave their homeland, eighty percent coming to the United States, a pattern of chain emigration that would continue well into the twentieth century. In 2000, over forty-four million Americans claimed Irish heritage, many tracing their roots back to the dark days of the Hunger Migration and its aftermath in Irish life.

Over the years, the Irish have not only made a place for themselves in mainstream America, they have shaped it in new ways. By the beginning of the twentieth century, only ﬁfty years after the great migration, the Irish had become major inﬂuences in every area of American culture. Their sportsmen ﬂourished on the playing ﬁelds and in the boxing rings;their songs and music ﬁlled the stage. As time progressed, their writers redeﬁned American literature; Irish names became prominent in business, science and industry. Perhaps one of their greatest achievements would come in fashioning a place in American political life. Coming from a world in which they had no voice, they ﬂourished in the openness of American democracy. In 1960, a descendant of Hunger Emigrants, was elected to the highest ofﬁce in the United States. From great suffering can come great strength. Back…